White House spokesman tweets while #Ferguson erupts: ‘A good time was had by all’ 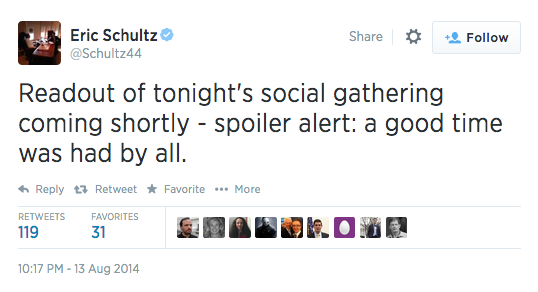 Yes, citizens of Ferguson, you may sleep easier tonight knowing that the much-trumpeted party for Vernon Jordan's wife Ann, the party at which Hillary Clinton and Barack Obama were supposed to hug, ended amicably. The White House pool report added more detail.


The menu consisted of surf and turf and pasta. The Obamas danced nearly every song. A good time was had by all.

Well, good. Here was the scene in Ferguson, captured from a livestream of the night.

In the live feed, one woman in Ferguson could be heard clearly. "Where are the politicians at?" she asked. "They want our vote, they

http://www.washingtonpost.com/blogs/the-fix/wp/2014/08/13/white-house-spokesman-tweets-while-ferguson-erupts-a-good-time-was-had-by-all
Posted by Unknown at 10:53 AM