Snowstorm to Sweep From Chicago to New York City

A snowstorm will sweep from the Midwest to the Northeast spanning this weekend into Groundhog Day and will cause major travel delays and disruptions to daily activities.

Close to 100 million people live within the swath forecast to be hit with accumulating snow or enough wintry mix to make for slippery roads from Saturday evening into Monday.

Two components of the storm will merge together along a boundary of cold air to the north and warm air to the south, over the Central states this weekend.

According to AccuWeather.com Senior Meteorologist Dave Dombek, "The sooner and more aggressively this happens, the stronger the storm will be and the farther north it will track."

The strengthening storm will carry moisture in from the Pacific Ocean and grab more moisture from the Gulf of Mexico and the Atlantic Ocean along the way. The result will be a swath of heavy snow from part of the Mississippi and Ohio valleys to part of the mid-Atlantic and southern New England. 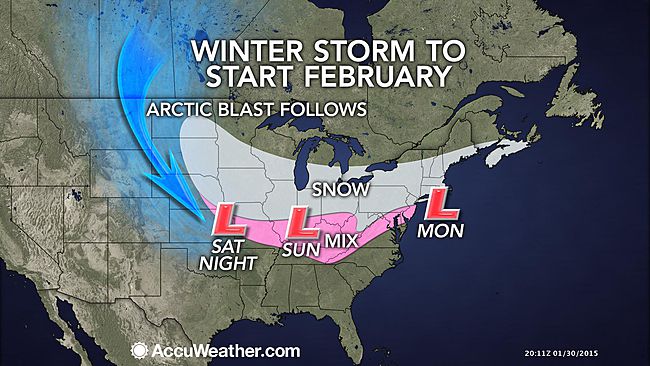 While the expectation of this warm/cold boundary has shifted over the past couple of days, Accuweather.com meteorologists are reaching a consensus as to where the heaviest snow is likely to fall.

Motorists from the Midwest to the Northeast should expect slippery and dangerous conditions, while there is a possibility of a large number of flight delays and cancellations. Some of the crews and aircraft displaced during the storm may have a ripple effect across the country by early next week. 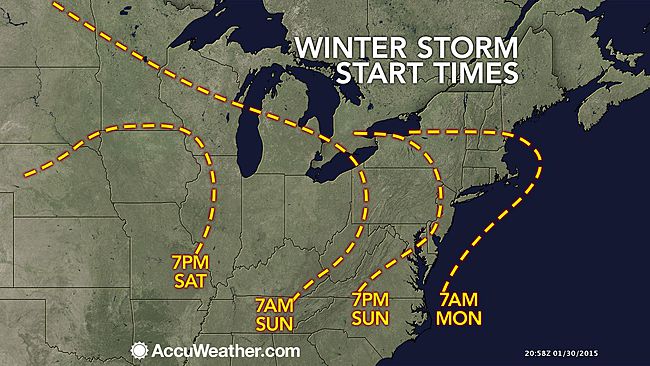 Enough snow to shovel and plow will fall in a zone of Central states' cities from Omaha, Nebraska, to Chicago, Indianapolis, Detroit, Cleveland and Columbus, Ohio, and Pittsburgh. In this area from near the Mississippi River to the western slopes of the Appalachians, a general 6 inches of snow is forecast with locally higher amounts.

In the Midwest, roads along the Interstate-70 and I-80/90 corridors will become snow-covered as the storm moves eastward spanning Saturday night and Sunday. 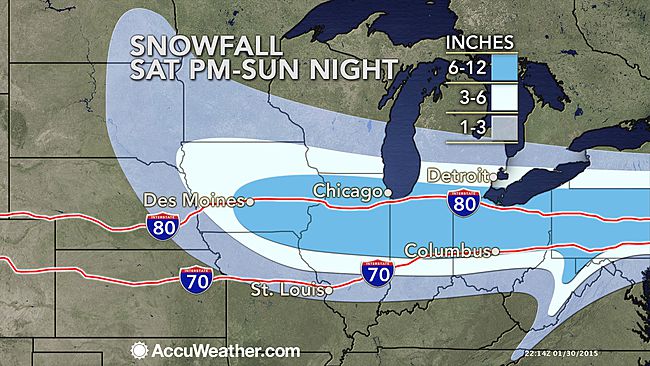 During the latter part of the storm, there will be enough wind to cause some blowing and drifting of the snow that is on the ground.

Travel throughout the I-80 corridor in Pennsylvania and New Jersey will become difficult, due to heavy snow. Motorists should expect slippery and dangerous travel to develop along part of I-81, the Pennsylvania and Massachusetts turnpikes, New York's Southern Tier Expressway and Thruway, as well as I-84 in the Northeast. 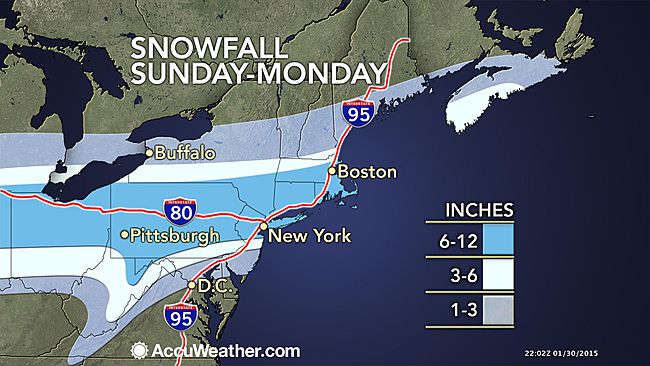 "The heaviest snowfall with this could be between the East-West Pennsylvania Turnpike and the New York border, over to northern New Jersey, the New York City area, and southernmost New England," Dombek said.

"A half a foot of snow is possible in this swath with the chance of local amounts into the double digits."