Four people in Montreal have locked themselves to the gates at SUNCOR oil refinery in the city's east end. 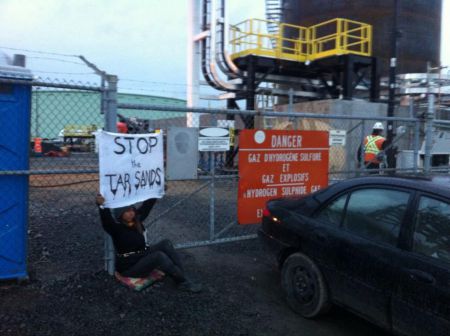 In a release issued this morning, the demonstrators explained that their action is to counter the reversal of Enbridge's Line 9B oil pipeline. The reversal in the pipeline's flow will bring bitumen from the Alberta tar sands east, through including through Montreal, for eventual export.

"If we're gotten to the point of taking this kind of action, it's because there are no other means for our voices to be heard," Alyssa Symons-Bélanger,
MORE
Posted by Unknown at 10:32 AM