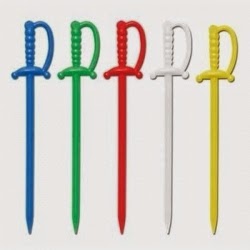 fracas occurred in the small town of Richlands, N.C. on International Talk Like A Pirate Day — Sept. 19 (every year). Full details concerning the lockdown have only come out this week, however, according to local ABC affiliate WCTI.
Richlands Elementary School was the first school to be locked down, just after 10 a.m., after a cafeteria staffer saw a “suspicious person.”
Specifically, explains a sheriff’s office report released Wednesday, the food service worker saw the teacher dressed up as a pirate and mistook the plastic sword part of the costume as a gun.
Richlands Elementary School had been celebrating pirates all week, area NBC affiliate WITN reports. Nevertheless, the cafeteria worker called the school office about the “suspicious person.”
“Shiver me timbers!”
MORE