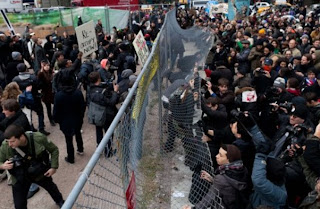 NEW YORK (AP) — Dozens of Occupy Wall Street protesters were arrested Saturday after they scaled a chain-link fence or crawled under it to get to a church-owned lot they want to use for a new camp site.
Protesters used a wooden ladder to scale the fence or lifted it from below while others cheered them on. A man wearing a Santa suit stood on the ladder among others, as they ignored red "Private Property" signs.
As officers made arrests, protesters shouted obscenities and hollered: "Make them catch you!" The group was inside the lot for a short time before being led out by police in single file through a space in the fence. About 50 people were arrested, police said.
"We're just trying to say that this country has gone in the wrong direction, and we need spaces that we can control and we can decide our future in, and that's what this is about," said David Suker, who was among those who scaled the fence.
Before the arrests, several hundred gathered in Duarte Square, a half-acre wedge of a park at the edge of Manhattan's Tribeca neighborhood and across the street from the vacant lot. They gathered partly to mark the three-month anniversary of the Occupy movement and partly to demand use of the lot, owned by Trinity Church.
Posted by Unknown at 6:13 PM