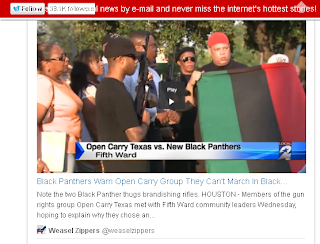 Send In the Clowns !
The New Black Panthers, Chicago Leftist and Al Sharpton


Members of the gun rights group Open Carry Texas met with Fifth Ward community leaders Wednesday, hoping to explain why they chose an historic African-American community to hold a demonstration.

Members of the group were met by a chorus of voices telling them to stay out of the neighborhood and warned they will be “matched gun-for-gun.”
“I’m going to tell you something homie, this is Fifth Ward, you ain’t coming in here running nothing,” community activist Quanell X said while flanked by members of the New Black Panther Party, who were holding assault rifles.
The two groups sat across from one another at a small folding table under a tree near the intersection of Lockwood and Lyons to discuss the details of Saturday’s upcoming event.

“You’re coming into the Fifth Ward and to the black community as insurgents,” said Krystal Muhammad, with the New Black Panther Party.

“I beg your pardon?” said David Amad, with Open Carry Texas.
“You are insurgents,” said Muhammad.