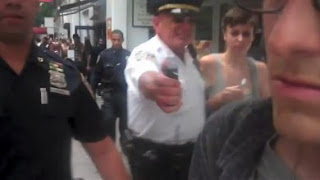 Updated 8:44 p.m. | The police and Manhattan prosecutors are separately examining a high-ranking officer’s use of pepper spray on a number of female protesters at a demonstration on Saturday.

Raymond W. Kelly, commissioner of the New York Police Department, said Wednesday that its Internal Affairs Bureau would look at the decision by the officer, Deputy Inspector Anthony Bologna, to use pepper spray, even as Mr. Kelly criticized the protesters for “tumultuous conduct.”

At the same time, the office of the Manhattan district attorney, Cyrus R. Vance Jr., has opened an investigation into the episode, which was captured on video and disseminated on the Internet, according to a person briefed on the matter who spoke on the condition of anonymity because the inquiry is continuing.


Inspector Bologna was identified on Wednesday in another video spraying others in the Occupy Wall Street demonstration with pepper spray. Recordings of the episodes show Inspector Bologna striding through a chaotic street scene along East 12th Street, where officers arrested some protesters and corralled others behind orange mesh netting.

Friday at 4 p.m. in Zuccotti Park there will be a "Protest Against Police Harassment, Brutality & Attacks," sponsored by the Bail Out the People Movement. "The NYPD is out of control," a spokesman for Bail Out the People says in a release. "The criminals on Wall Street go free and enjoy big bonuses, while the NYPD focuses all its resources on spying on and infiltrating mosques and all levels of the Muslim community.
Posted by Unknown at 9:30 AM