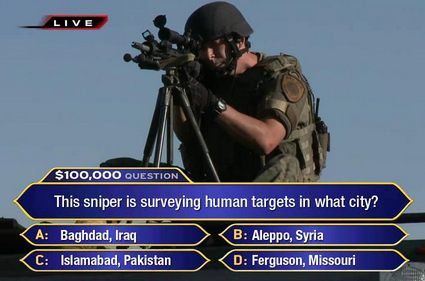 Following what may be the greatest few weeks in decades of exposure to police brutality, police in Ferguson, Missouri, have now shot and killed an 18 year old unarmed teen who, according to witnesses, was holding his hands in the air when he was shot. Peaceful protests that began shortly after the shooting yesterday were met with full on military style anti-riot police.
What started as a peaceful protest soon turned into a small riot which resulted in some stores being looted and shots being fired at police.
While the riots will not help the cause, they are also not surprising considering the sharp uptick in anti-police sentiment stemming from the massive amount of police violence against the working poor and minorities in America. Police violence which is increasingly being captured on cell phone cameras and posted online daily. We have a whole section on the Police State on our website which can be viewed here.

Frustration is now boiling over after decades of discriminatory policing, near-zero accountability, and lack of will from lawmakers to reel in the spiraling police state. In fact, as we have documented in depth, the militarization of the police is only rising despite the increased outcry from concerned citizens against it. The overbearing presence of riot police in Ferguson deployed to contain peaceful protesters may have been the very spark which ignited the rioting in the first place.

In the predictable manner in which the corporate media operates, the news cycle has been shifted away from the tragedy of the killing of 18 year old Michael Brown, and switched to the few who lost their cool and began looting and rioting.

Official news release from #Ferguson PD since death of #MikeBrow